Clergy families around the world are heaving deep sighs this afternoon: We made it through Holy Week. Phew! 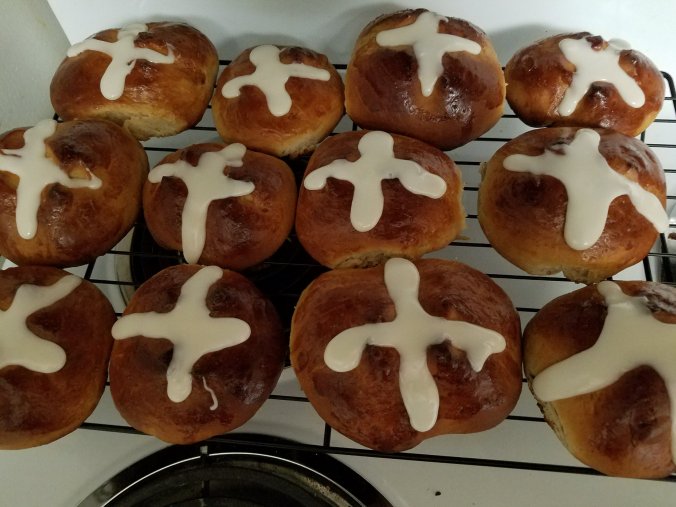 This year I made hot cross buns for our Easter morning breakfast, from this recipe (foodnetwork.com). They came out very well, though I will note that the dough was so sticky that it was almost impossible to work with when it came time to knead. Next year I will increase the flour by half a cup or so and see if that does the trick. They tasted just as they ought, and I am especially pleased with getting the icing right. Often I have trouble hitting the right consistency without going over, so this time I added my liquids a quarter-teaspoon at a time. That was a bit tedious, but it definitely paid off!

We also made “resurrection cookies,” sometimes called “empty tomb cookies,” though much better known just as meringue! The idea is that you recount the story of the crucifixion as you make the meringue cookies, giving each ingredient a symbolic interpretation. They get put into a warm oven overnight (which you seal up with masking tape to represent the seal on Jesus’s tomb), and when you get them out the next morning the cookies are hollow like the empty tomb — at least, that’s the idea.

This is the recipe I used for these, and they came out terribly. I mean, they’re passable as meringues, but they didn’t hollow out at all, or even set in the middle. They are also cloyingly sweet — almost inedible even to my (very) sweet tooth. Next year I will have to just use my regular recipe, which has less than half the sugar called for here, and I will leave the oven on for 10 minutes or so once the cookies are in before turning it off. I like the concept; the kids were pretty engaged; the only problem was the recipe.

Culinary adventures aside, it’s been a lovely Easter. We went to the church egg hunt yesterday (where a good time was had by all), the service this morning was beautiful, the choir played an excellent April Fools joke by coming in with Joy to the World after the intro to the Hallelujah Chorus (which we did sing properly afterwards, I hasten to assure you), everyone ate way too much sugar, and then we had simultaneous meltdowns circa 3 pm. As one does.

A blessed Easter to you and yours. He is risen! He is risen indeed! Alleluia!

2 thoughts on “And then there was Easter”