This book was approximately 0% enjoyable, but I am still glad that I read it. 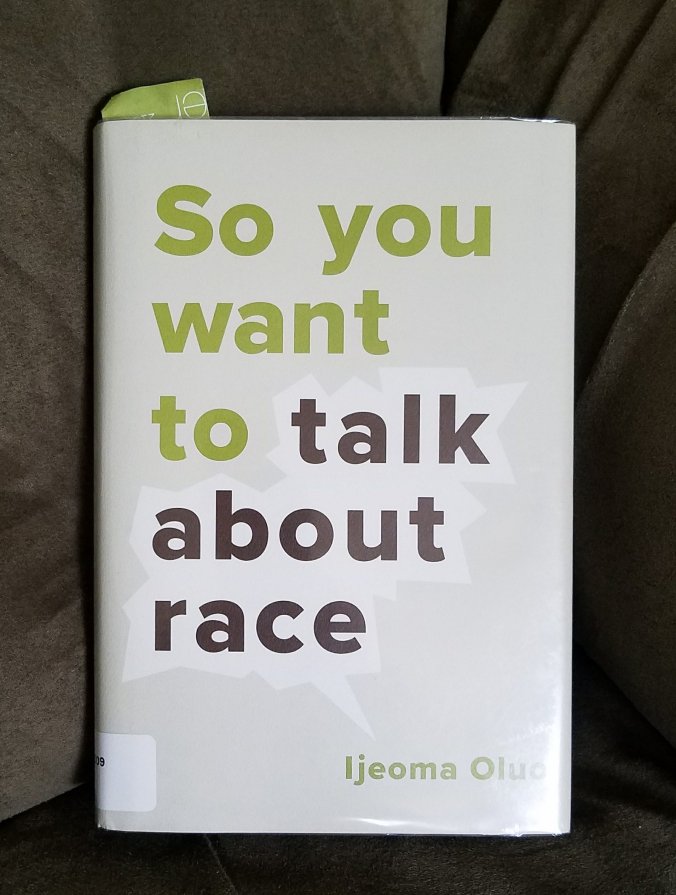 Over the past year or two I’ve been engaged in an informal, personal reading project on the theme of “try to understand America” — you know, since I live here and all. So I have been reading books about America, on and off, and more and more of my reading has come to centre around that great big issue of race. I don’t keep any sort of reading plan for this project, but I do keep an eye out for books that look like they would help me further my understanding, particularly in regards to the American racial divide. A few months ago So You Want to Talk About Race by Ijeoma Oluo came up as a promoted book on my county library’s website, and so I added my name to its long hold list and waited for it to show up.

Its cover copy calls it “An actionable exploration of today’s racial landscape, offering straightforward clarity that readers of all races need to contribute to the dismantling of the racial divide.” I would say that’s accurate. It’s also a hard and uncomfortable read, as should probably be expected. I had to take a lot of breaks to think about things. But though there are a lot of areas where Oluo and I disagree (for example, I will never support Planned Parenthood, for anything, ever), I appreciate her perspective and the explanations she offers. So much of the commentary around racial issues — on either side of the divide — is so very reactionary that it can be hard to figure out what is a real position and what is a strawman and what is something in between. Oluo answers questions about things like what people actually mean when they talk about “systemic” racism, and what being told to “check your privilege” is actually asking you to do, and the question (that I think a lot of us struggle with) of “what if I talk about race wrong?”. It is a gift to be able to encounter these questions and their answers outside of the heated environment of immediate debate, allowing for time to digest and consider on the way. Her examples were very clear and helped me to understand some new things.

Yes, racism and racial oppression in America is horrible and terrifying. The feelings it brings up in us are justified. But it is also everywhere, in every corner of our lives. We have to let go of some of that fear. We have to be able to look racism in the eye wherever we encounter it. If we continue to treat racism like it is a giant monster that is chasing us, we will be forever running. But running won’t help is when it’s in our workplace, our government, or homes, and ourselves. (7)

What I found most personally helpful was Oluo’s discussion of privilege. She defines it, quite simply, as “an advantage or a set of advantages that you have that others do not” (59). These areas of privilege often rest on things outside our control, like our skin colour or the nation we’re born in or the relative affluence that our parents enjoy(ed). And being privileged in one area doesn’t mean being privileged in all areas — consider, for example, someone who grew up wealthy (privileged) but also has a physical disability (unprivileged). Most of us will have some areas where we are privileged and some where we are not — that’s perfectly normal. So then what’s the point of examining our privilege? Is it so that we can feel guilty? Should we be apologizing for areas of privilege — which, again, are mostly outside of our control anyway? Not so; nor should asking someone to “check their privilege” be used as a method of shutting down a conversation.

Rather, it’s asking us to be aware of how the advantages we may have had can leave us blind to others’ struggles. It’s asking us to be aware that where we’ve ended up in life is not only due to our own hard work and merit, and that others might work just as hard and be just as meritorious but still end up in a worse position because they started several steps behind. And it’s also an opportunity, to identify “those areas where we have the power and access to change the system as a whole. […] When we identify where our privilege intersects with somebody else’s oppression, we’ll find our opportunities to make real change” (65).

This is a lot like what Andy Crouch talks about towards the end of Culture Making: spending our cultural power alongside of / on behalf of those who have none. So checking our privilege — or examining our cultural power, to use Crouch’s term — is a chance to ask ourselves not only where we may have gotten a head start in life, but how we can use that to advocate for others. Examples:

As Oluo writes, “Every day you are given opportunities to make the world better, by making yourself a little uncomfortable and asking, ‘who doesn’t have this same freedom or opportunity that I’m enjoying now?'” (69). None of us are going to be working towards all of these things at the same time. But if we are willing to examine our advantages, and to create the habit of looking out for those who are less advantaged, we can be working towards more of those things, more of the time. And that’s probably a really good thing. I don’t think we need to feel guilty for the various privileges that we’ve enjoyed — but we shouldn’t feel complacent, either. As a Christian I believe that we are called to use our blessings to bless others. And though Ijeoma Oluo is an atheist, I think we can certainly agree on that.

3 thoughts on “Learning to talk about race and privilege”