I did not expect to be posting another crochet project so soon after the last one, but this one whipped itself up incredibly quickly, taking maybe five hours all told.

These were two more yarns from the church stash: the purple is Baby Bee Hushabye Solid in the colourway “sugarplum” and the blue-white is Loops & Threads Snuggly Wuggly in the colourway “baby denim marl”. I wasn’t crazy about either of these yarns on their own, but I had a hunch that they would look good together. The result is a nice mixture that’s a little icy and not overly feminine, with some extra visual interest from the random yarn pooling throughout. 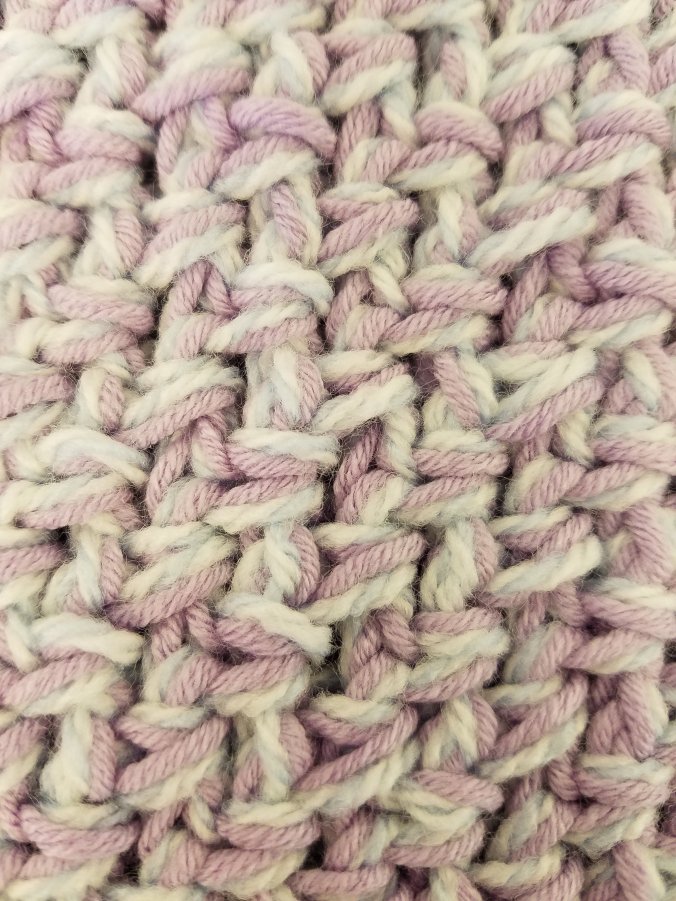 The blanket was worked in moss stitch (what else?) using both yarns at once on an N (9mm) hook. That’s what made it work up so quickly: both yarns are light-weight but using them together made it more like a bulky yarn, and combined with the large hook size that gave me a lot of bang for my buck in terms of row height. I used about 2/3 of a skein of the denim marl, and somewhere between 1-1/3 and 1-1/2 skeins of the sugarplum. They were fairly uneventful to work with, except for a few knots in the second sugarplum skein. Well, sometimes there’s no avoiding that!

This was a fun one to make, not least because it came together so quickly. I may experiment more with using multiple yarns on the same hook — as it turns out, it’s an effect I rather like.