Sometimes I mostly write a post and then forget about it. Rescued from my drafts folder, an account of some of our Fall:

This year we took the kids out trick-or-treating for the first time! We had previously let the holiday pass by unremarked — not out of any particular objection to Hallowe’en, but just because it seemed a lot of work for kids who were to small to get much out of it (or even eat candy, for that matter).

Anyway, our glorious run of non-participation came to an end this year as Anselm was old enough to clue in to the fact that something called Hallowe’en a) existed and b) looked like fun. Fortunately for me, neither of them has yet realised that children usually get to pick their own costumes, so I was able to (enthusiastically) inform them of what their costumes would be, after I looked around and figured out something I thought I could make relatively easily and cheaply.

Behold, a scarecrow and a bird:

For Anselm’s costume, I cut down an old shirt that my husband was getting rid of anyway, bought a cowboy hat at Party City, and the rest is just strips of yellow felt cut into fringes and glued to the insides of his shirt. The fringes around his ankles are just safety-pinned together with a regular pair of jeans over them.

For Perpetua, I started with a blue t-shirt a few sizes too big for her (I wanted both costumes to fit over a couple of inside layers for warmth), and cut and glued teardrop-shaped felt onto it for her front plumage. I measured her from the middle of her neck down to her wrists and cut two large wings for the back that would be long enough to come down and cover her hands; those were also just glue-gunned in place, as were the little wrist cuffs. The headpiece was all felt: a wide band with two cartoon-eyeball-shaped projections at the front, white and brown felt glued to that to make the actual eyes, and yellow felt cut like a slightly rounded triangle and then folded and glued to more or less look like a beak. I also glued blue feathers sticking up from the inside of the headband — you can just see a few of them in this picture on the sides.

The night itself was a success; we went out after dinner, and they got totally tuckered out after the first two blocks. Little legs get tired! We carried them home, sorted the candy, and that was that. Except, of course, right after Hallowe’en comes All Saints, so we were still celebrating the next day!

Our All Saints was very simple: I put a tablecloth on the table (nothing says “special dinner” like digging out a tablecloth, amirite?), made pan de muerto, and we talked a bit about the saints. Oh, and ate a bunch of candy from the night before, of course. The end.

I used this recipe for pan de muerto again, with a few adjustments. I was able to get my hands on some aniseed this year (last year I left it out), which added a really lovely flavour. I cut the recipe in half to get a more manageable size for our family of four, and I decided to skip the glaze. Last year the glaze tasted good, but it made the whole loaf crazy-sticky, which made it hard to cut and even harder to get off little fingers. The bread is sweet enough on its own, really. I forgot to get a picture of the loaf after it was baked, but here are my crossed bones during the second rise: 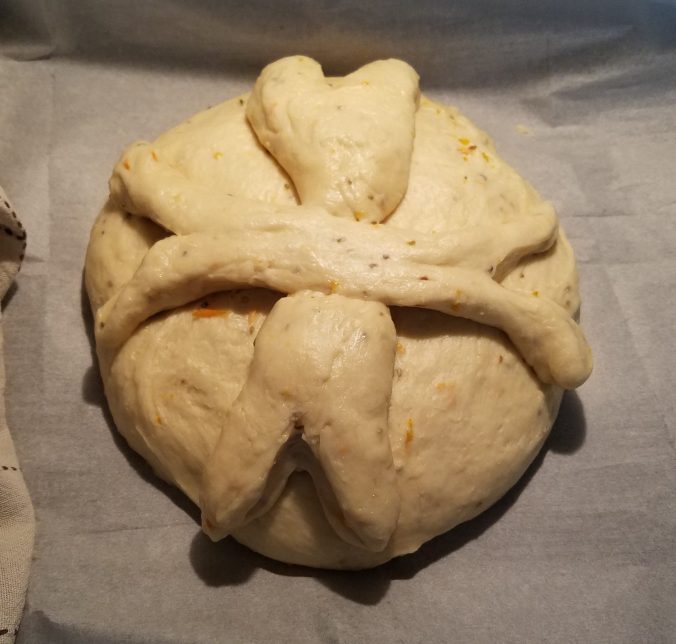 And that was that.

One of the most satisfying things to me as we build our family and liturgical traditions was realising that nothing has to be extravagant to be special. Simple works very well, as long as simple is different from our regular days. I look forward to continuing these traditions as our children age — even if it means that they will get to choose their own costumes one day!