This is an enigmatic and compelling little book. I love it.

You may be familiar with the genre of “found poetry”, where a poet takes something like, say, a newspaper article and removes all the words she deems extraneous, leaving a poem behind. Aug 9 — Fog, I think, belongs to that tradition as well, only this time it’s not found poetry but found prose. Here is Kathryn Scanlan’s account of how it came to be, starting with the purchase of a stranger’s diary from a public estate auction:

The diary was a Christmas present to the author from her daughter and son-in-law. The author wrote her full name and address on the front page. She resided in a small Illinois town. She was eighty-six years old when she began recording in it. […]

At first I loved only the physicality of the diary — the author’s cramped hand, the awkward, artful way she filled the page. I liked its miserable condition. Its position was tenuous — yet here it was. I didn’t try to read it. I kept it in a drawer. I assumed it illegible.

But then I did read it — compulsively. I hunched over it, straining my neck. I read it front to back — perhaps a dozen times by now.

As I read, I typed out sentences that caught my attention. Then, for ten years, off and on, I played with the sentences I’d pulled. I edited, arranged, and rearranged them into the composition you find here. (vi-vii)

The result of all this editing, arranging, and rearranging is very beautiful and strange. There are recurring characters (Vern, D., Mildred, Maude) as well as others who make only single appearances; since the diarist was writing for herself we are left to make educated guesses about their relationships. I thought “Vern” was almost certainly the diarist’s husband, but then I found an entry referring to “D. & Vern’s anniversary”, so perhaps they are the daughter and son-in-law. But I don’t know. It’s a little off-balancing.

The writing is spare; the diarist uses many short forms (“nite”) and omits most of her “to be” verbs. The pages are spare, too; Scanlan has set the text for each day in a sea of white space: 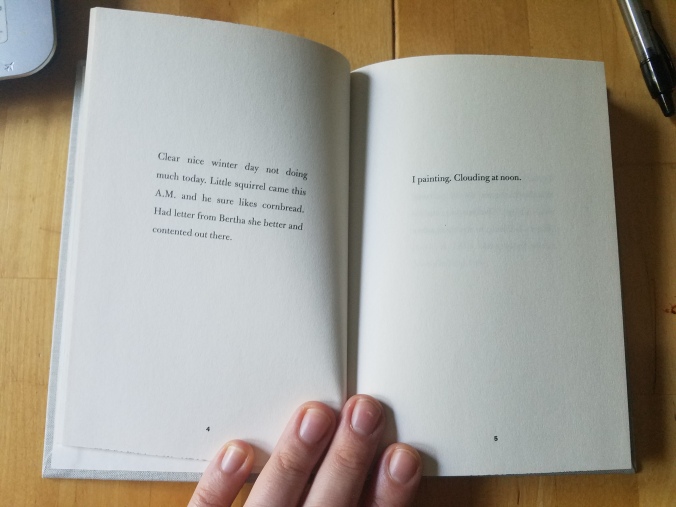 “I painting. Clouding at noon.” Indeed.

This is a library copy but I think I may buy one of my own. It feels like the kind of book I’ll go back to, maybe precisely because it’s so… I’m not even sure how to describe it. Because it’s so the way it is. A few of my favourite pages:

Terrible windy     everything loose is traveling. (33)

It come so nice:

All kinds of roads. Dead end roads, roads under construction, cow paths & etc but had good time, a grand day. (51)

This is a quick read, only 110 pages and most of them white space. You can easily get through it in a sitting, or in bed before sleep. And when the wind blows, maybe you too will note that everything loose is traveling.

2 thoughts on “Everything loose is traveling”